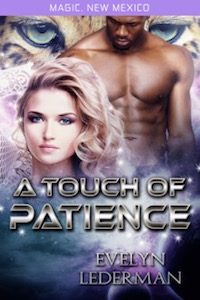 A Touch of Patience

Patience ‘Pati’ Harper does not possess the virtue her name depicts. She is the last witch in her family’s line and feels pressured to bear a child, even though her temperament does not result in many second dates. Being only one-quarter jaguar shifter, her inability to shift almost brought her ancestral line to an end when she was almost killed in her teens.

Danyal Zabare, a jaguar shifter, who grew up hearing stories about soul mates and is determined to settle for nothing less. He recognizes Patience as his mate the instant he lays eyes on her. Leaving everything behind, Danyal follows her through a portal to an unknown world.

Confronted with her past and a man claiming to be her future, Pati must evolve into what destiny demands. Will Pati’s magic be strong enough to save her and two innocents from the violence of her past.