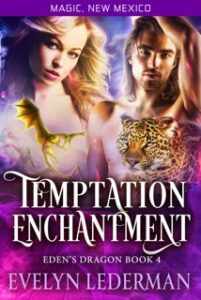 The Worlds of Magic, New Mexico

She can tempt any man, except for him.

Men have died to possess Nour, even those who came to kill her. For centuries, dragon shifter Nour has used the gift she inherited from Eden’s Dragon. Everything changes when she materializes in Magic, New Mexico. Will her enchantment finally end?

Jaguar shifter Elon possesses psychic powers he refused to use. Against his better judgement, he aids his cousin and enters a parallel dimension. Sometimes there are no choices when it comes to protecting his newly discovered mate. 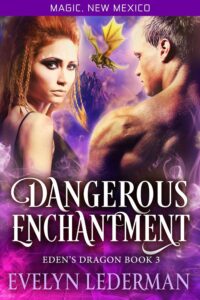 The Worlds of Magic, New Mexico

It’s kill or be killed.

Fatima, a victim of an enchantment, takes her human form only a single day each year. A born warrior, she goes after the member of the Brethren who has sworn to kill the enchanted female descendants of Eden’s Dragon. Everything changes when a witch tells her to come to Magic, New Mexico to reunite with two of her sisters.

Brett Dixon has stalled his dad’s plans to reunite with his runaway brother. Together, the twins have the ability to conjure a jinn to grant all their immoral father’s wishes. When a naked woman appears before him and then later changes into a dragon, he knows he must find her.

Forces converge in Magic, New Mexico, where anything is possible. 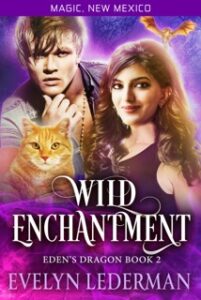 Eden’s Dragon, Book 2
The Worlds of Magic, New Mexico
Release Date: February 9, 2021
Blurb:
Celine is cursed. First, every man she’s ever loved died. Secondly, she lives but a day a year, spending countless days trapped within a ceramic dragon figurine. Has she finally met the man who can change her luck?
Alachua Dixon is on the run from his powerful family. Once he meets Celine, Alachua exposes himself to discovery. He will risk everything to possess the woman of his dreams.
When two forces collide in Magic, New Mexico, anything is possible.
Download here:
Amazon