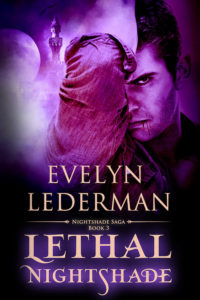 Miranda had accepted her ultimate fate to bear a vampire’s half-ling child, but her sister’s bleak future caused them to run. In a world ruled by vampires, the girls’ chances of finding a safe haven are doubtful. She risks everything, including their lives, following a vampire she is inexplicably attracted to.

Sammuel mourned his late wife for three thousand years. But an unexplainable force draws him to a human woman. An impulsive act bonds them together, challenging the oath he made to his long deceased love.

Can Miranda escape her destined future? Will Sammuel be able to let go of his past?

Dare to enter the Nightshade universe.